Neural Networks and the Backpropagation Algorithm

The other day I had been looking up information on machine learning. I’m new to some of the topics in this field but I have been introduced to them before. I’ve always wanted to learn more. The idea of teaching a computer how to “learn” just seems intriguing to me.

Specifically I had been researching neural networks. They are useful because they can help uncover hidden patterns in a plethora of data, or be taught to perform certain tasks such as handwriting or facial recognition.

I had watched an MIT OpenCourseWare Lecture which gave a rough introduction to neural networks which I found to be quite captivating. I found it so fantastic actually that I wanted to share the basic concepts here. For the purpose of this post, I’m going to assume that we’re teaching this neural net via supervised learning.

In other words, we are going to make this neural network learn by giving it a set of “correct” input and output values, which it will use to calibrate, or change its own structure to make sure that it also outputs the correct values. Let’s dive in!

To explain briefly, neural networks are modeled after the same neurons that exist in our brain. For our purpose we are going to focus on only a few of the main features of a neuron which are critical to the model of neuron.

The main parts that we are going to focus on:

The dendrites are small tree-like structures that are stimulated when enough neurotransmitters are dumped into the synapse between a neuron and the end of the dendrite. Some of these dendrites might be easier to stimulate than other based on various factors

The axon is the lengthy part of the neuron which simply propagates a “spike” of energy to the axon terminals, which originates from the dendrites.

The axon terminals dump neurotransmitters into the synapse to help stimulate the dendrites of the next neuron.

You can imagine some synapses being smaller or larger, needing more or less neurotransmitters to excite a neuron.

This is a gross simplification of a neuron, but for the model of a neural network, we don’t need to understand more than this. 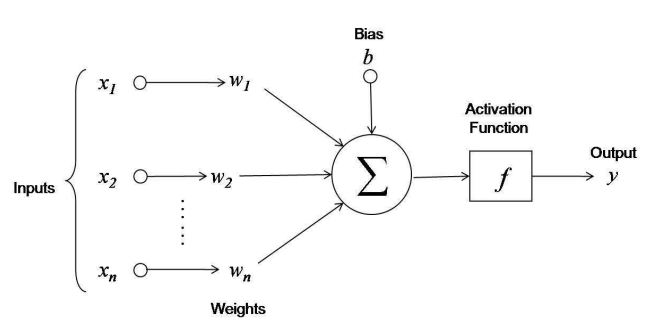 First, notice the inputs. Each input from to is given as an input to the neuron. Each of the inputs is multiplied by a weight corresponding to an input before being summed into the function.

The neuron also has a bias, labeled in the diagram, which I like to call . We can think of this bias as a given input to each neuron that always has a value of -1. The weight of the bias input can be adjusted accordingly.

Think of each input multiplied by a weight representing a neurotransmitter that is dumped into a synapse between neurons by one of the axon terminals.

From here we can represent the total stimulus as the sum of each input multiplied by a corresponding weight. 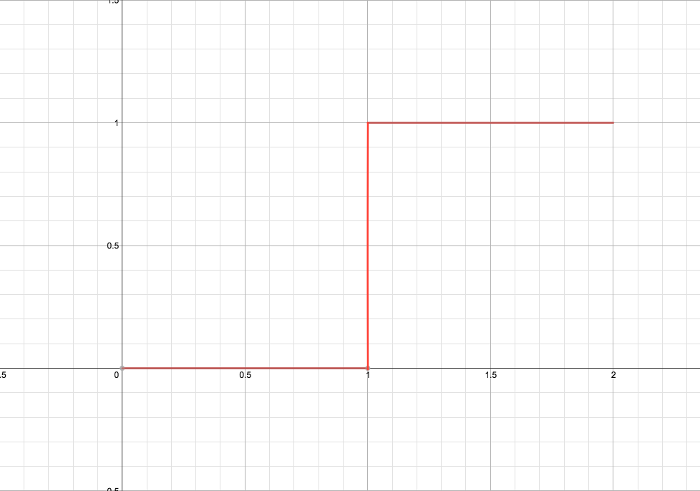 This part is where the dendrites need to pick up enough neurotransmitter signals to send that spike of “energy” or “excitement” down its axon to the axon terminals.

Next, once the threshold is activated or not, we will get an output from this neuron. We can string many neurons together and in different patterns with different layers to create a network. More complex networks take up more computational power, but they can also convey more complex functions.

Once we create and run a test using our own neural network, we are going to need to find out how good (or bad) the neural network did at calculating our answer.

Remember how I said that the neural network is given a set of “correct” inputs and outputs to learn from? Well here’s where that comes into play.

Let’s call this function . Also, for simplicity’s sake, and because this is convenient we’re going to make the performance function the following:

(You’ll see what I mean by convenient later)

So now we’ve got this model. We have a function to test whether our output is close to what we want it to be. We have a way to add our inputs together. What comes next?

Well, we need to have some way of adjusting the neuron to make sure we get closer to our desired output. But how do we know what to adjust? and by how much?

We’re going to use a method called gradient descent (or ascent depending on direction). This will help us determine which direction we need to move our weights in to get closer to the desired value, . Be prepared for lots of math.

Given these functions, we can see our performance function is now

We can see from here the performance function is really just a function of the inputs, and the weights .

Now imagine that we add some complexity to our neural network. We are going to chain together multiple neurons to create layers. We can then chain these layers together. The more chains and connections between neurons the more complex are the things we can model or predict.

Mathematically speaking for this network we have vectors and for each layer. The individual values of are the values we modify in our network to conform the inputs to the desired outputs.

Just imagine the above diagram of the neural network laid end to end and on top of each other. A general overview can be seen below, where each circle represents a neuron: This is where things start to become more interesting. Using the algorithm of gradient descent, we can alter the weights by taking the gradient of our performance function with respect to each weight. We can also multiply this gradient by a rate constant, let’s say , that will determine how much we alter the weights over each iteration.

So let’s look at our formula

This is now telling us that the change in our over each iteration is going to be equal to multiplied by the partial derivative of with respect to each weight.

But wait! We have a problem here. We can’t just simply take the partial derivative of with respect to because lies within our other function . This means that we are going to need the chain rule.

So this brings up another problem: because we are going to need to take all these derivatives all of the functions in our neural network must be differentiable.

It’s called a sigmoid function. You might have seen it before. It has the form

This function also happens to be convenient. (You’ll see why in a second)

The graph of the sigmoid has the following shape: 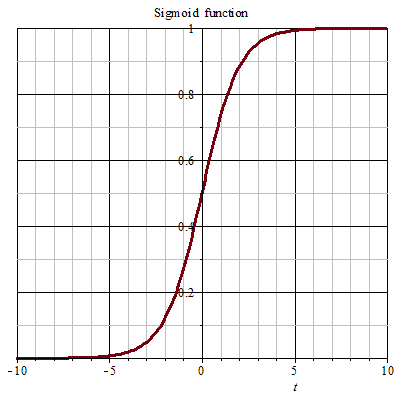 Great! So where do we go from here?

Well, I suggest you watch the video I linked earlier if you want a really good understanding of how this works. I will do my best to explain it, but I won’t go into explicit detail of how this all works together. The video will explain things more thoroughly.

So if we keep taking our partial derivatives with the chain rule, it turns out that we will need to take the derivative of this sigmoid function and the performance function.

Then we rearrange our derivative a little bit:

Voila! The derivative of the sigmoid function turns out to be given in terms of the original! I find that to be quite astounding. If you don’t believe me you’ll just have to take my word for it. I promise you it works. (This is also why I called this function convenient).

It’s pretty simple, so I’m not going to go into it, but .

So it turns out to be a pretty simple derivative, which is why this function just so happens to be convenient for our purposes.

Calculating The Change via Backpropagation

Calculating the change for each weight isn’t as simple as a single derivative as the neurons in a hidden layer put a bunch of junk in the way, so we end up needing the chain rule. That math can get pretty messy, so I’m going to do my best to simplify it.

So just as a refresher, let’s look at what we need to calculate. Remember than represents just the weights of a single neuron. We have to calculate the adjusted weights for every neuron of each layer in our neural network.

Consider where n represents an arbitrary number between and for each neuron. is the output of the threshold function from the neuron on layer where, represents the network layer on which variable lies.

will be equal to the following if it is an output neuron. Remember is the final output and is desired output.

and if gamma is an inner or “hidden layer” neuron

So now that we have , the change in weight for a given neuron on the output layer is

So what does all of this mean?

If we take a look at the math, starting at the output neurons, we calculate their values which rely on the network’s output. We can do this fairly quickly for our output layer.

Then we’ll move another layer closer to the starting point of our network. The change in their weights for the networks depends on the of the layer in front of it, which we happened to have already calculated.

What this means is that when we are calculating exactly how to adjust the weights in our neural network, the change in each weight depends on a few things.

The other great thing about this algorithm is that the change in weight depends on things you’ve already calculated, or things you’re going to have to calculate anyways. It’s extremely effecient. There are few, if any, wasted computations.

And that’s simply it. The most basic of neural networks and the backpropagation algorithm.

This whole post was a learning experience for me, so I feel I should give credit where credit is due.