Note: This set of notes is not entirely complete and excludes materials from the first two weeks of the course.

Typically we’re used to representing all of our numbers with a total of 10 digits (0-9). When we change the base of a number system we are basically restricting (or expanding) the amount of digits we can use to represent numbers in any mathematical expressions.

With binary numbers systems, we are restricted to the use of only two digits (0 and 1) in order to represent numbers.

Any number in binary is typically represented as a sum of powers of two.

Given a binary number \(1010\ 0110\) we can break this into a table in order to determine its value in our traditional base-10 numbering system.

From this we can sum the powers of 2 digits whose value is equal to 1 in order to find the decimal value.

A general expression for the decimal value of a binary number with digit values of \(c_i\) and \(n\) number of digits is:

One thing that is interesting to note is that we need to use more digits to represent the same amount of information with binary.

How do we represent decimal* values in binary (or any number system for that matter), that is, values between 0 and 1?

Given a number system of base \(n\) (in binary, \(n = 2\)) we represent everything to the right of the decimal point as negative powers of \(n\), similar to how we normally represent a larger, positive number.

Converting from Binary to Octal and Hexadecimal

Converting from binary to octal or hexadecimal (or any combination of two of these numbering systems) is quite easy due to that fact each numbering system is a power of 2.

We can follow a similar set of steps for the reverse procedure, by simply generating groups of 3 or 4 binary digits for hexadecimal.

Adding two binary numbers is relatively simple. Simply align the digits and follow the same procedure that you would for adding decimal numbers, except remember that you carry if the addition goes over 1.

Now what about subtraction? This is important because it leads to the notion of negative numbers. How do we represent these?

One possible way to represent a number as negative in a sense is to use a “signed” bit - a bit that basically will tell us whether or not the number we are currently using is going to be a positive or negative decimal value.

Another way to represent the negative number is through something called “one’s complement” where we simply flip all the bits of a positive number to represent its negative.

And lastly, the most widely used version of number complementing systems which can be found in many modern applications is the two’s complement.

Two’s complement functions similarly to the one’s complement, except that after flipping all of the bits, we need to add 1 to the result.

In a CMOS transistor we have three different pins. The behavior of the pins depends on the type of transistor (n vs p).

Behavior of an NMOS (n-channel) Transistor 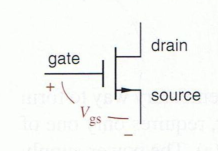 From the diagram above note the three different pins and the direction of the source arrow.

In an NMOS transistor you should make note:

Behavior of a PMOS (p-channel) Transistor 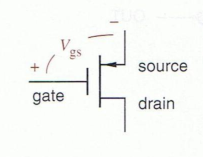 A PMOS transistor is almost like a reverse or opposite to the NMOS.

Note here that the drain is now typically at a higher voltage than the source.

NAND and NOR Gates with CMOS Transistors 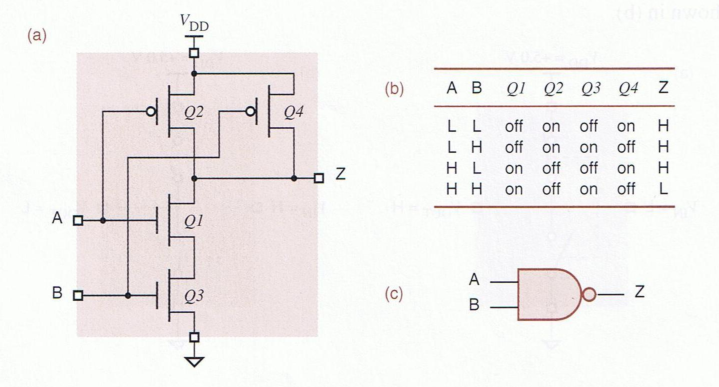 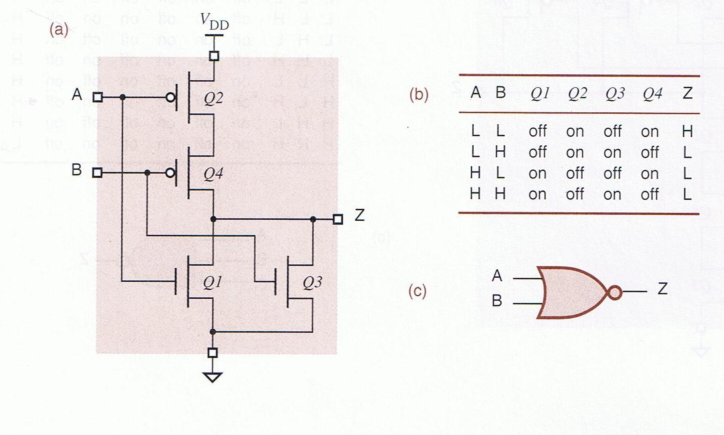 Given the boolean expression:

We can say this expression is equivalent to:

A minterm is a product of variables ANDed together and produces a “1” i.e.

A maxterm is a sum of variables, ORed together and produces a “0”. i.e.

Notice how the sum and product have different values, but the set of each containing both numbers completes the set of numbers possible in \(X Y Z\)

An alternate way of deriving a function table.

We would first create a table of size 2x2

Notice how we changed from 01 to 11 instead of 01. This is because for the K-Maps we use the gray code, which is more efficient in terms of digital logic design becase we only ever change a single digit at a time even when looping back from the beginning to the end.

In binary when we go back from 11 to 00 we must change two digits as opposed to 1.

Depending on the logical function sometimes we can create equivalent sum-of-product (or product of sum) expressions by grouping terms on a K-map. What this does is allow us to eliminate certain variables after identifying and grouping terms correctly.