Digital System Design is basically a mix of digital logic design and computer architecture put together with a little bit of SystemVerilog mixed in. This page provides the notes I took in order to study for the final exam.

Combinational logic is defined as having a set of inputs, and a set of desired outputs which can be realized via a timing and functional specification.

A way to think of these circuits is a set of inputs and corresponding outputs for every combination of the inputs where the function is performed by a black box. Inside that black box are the logic gates which define the function and timing performance of your combinational logic.

Product of Sums vs Sum of Products

An example is below

Sometimes we can actually implement functions without using the two-level realization from SOP/POS. An example of this is with the XOR function. For a three-input XOR the function is \(Y = ABC + A\bar{B}\bar{C} + \bar{A}B\bar{C} + \bar{A}\bar{B}C\)

Given a logic circuit we can simplify it with the bubble pushing method.

This uses Demorgan’s rules where

You can determine the propagation delay by looking at the longest path through the circuit.

Similarly, the contamination delay can be determined visually by looking for the shortest path through the circuit.

Sequential logic represents the family of digital logic elements which we use to build devices and circuits which are made to work over a period of time where the outputs of the next logic state depend upon the previous outputs. Many of these circuits will contain a CLK signal which controls the frequency at which the device operates.

The main building blocks of sequential logic design are latches and flip-flops.

The most basic latch is the SR Latch which is a pair of cross-coupled NOR gates.

The truth table is as follows:

Notice the odd behavior of the SR latch when S and R are both asserted. According the the textbook, the SR latch conflates the issue of “what” and “when” which makes understanding this latch sometimes difficult.

The D Latch Solves this issue by using the SR latch and changing its inputs from S and R to D and CLK.

The state table for a D latch is

A register is simply a bank of flip flops which are all connected to the same CLK signal with different inputs. They allow us to save and output multiple values all at one clock edge.

We can add other inputs to our flip flops by using extra gates outside of them.

You can make a D flip flop enable-able by adding an AND gate in front of the CLK with the ENABLE signal. AND the CLK and ENABLE and you can ensure operation only when the ENABLE is logic high.

You can also make the D flip flop reset-able with the same idea. Use an AND gate in front of the D input. The input to the AND gate is D and RESET’ this way, whenever RESET is asserted, RESET’ is 0 and the result of the AND gate is 0, resulting in the Q ouput being 0 on the next clock edge.

Synchronous sequential logic is when we have combinational logic where some of the outputs are fed back into the input of the circuit. The catch is that instead of having direct connections, we insert registers in between the output and input. This means the feedback loops change on with the state of the CLK signal. We say that it is synchronized to the clock giving us the name synchronuos sequential logic.

For sequential logic to be stable, the outputs must be stable for some aperture time. Similar to how a camera needs the subject to be still for a period of time in order to deliver a crisp picture, a flip flop must have a stable input for a minimum amount of time to be read properly.

Another constraint is that the clock period must be long enough for all signals to settle to their proper values. Overall this limits the speed of operation for an entire system. It is also likely that the clock signal does not reach all elements at the same time. The variation in clock timing is claled clock skew.

The dynamic discipline of a circuit refers to the fact that the inputs must be stable during the aperture time.

For a circuit without combinational logic, simply having registers/flip-flops in sequence we get

There are two common prevailing description languages that many logic designers use. VHDL and Verilog. This course mainly just covered using SystemVerilog, an IEEE standard

Everything in verilog is built around hardware modules. You can define the modules with the following syntax

Lots of functions can be expressed as simply a set of gates which don’t have complex functions like sequential synchronous circuits. The functional verilog symbols representing common logic operations are shown below

If your circuit has a lot of inputs you can define them kind of like an array where you can access all of the wires via indexing on a single variable instead of having to explicity type all of the variables.

Like normal programming languages you can write conditional statements to assign values.

Like normal programming languages you can write conditional statements to assign values.

The following table describes operator precedence in verilog. Note that AND takes precedence over OR

Ordered from highest precedence to lowest.

When writing a number in verilog, the default assumption is that you are writing a decimal number with an arbitary number of bits.

However you can specify how many bits your number is and the base which it is represented (within code). You can do so with the following format.

Because a vast majority of logic elements are designed with D flip-flops in modern systems, verilog provides and easy-to-use interface for using these registers to store and update value based on past states.

In this case statement only gets executed if one of the events in the sensitivity list occur. So for a basic D flip flop you could write

you can also use always_ff if your goal is to emulate a flip flop. Verilog tools should throw a warning if you try to use an always_ff statement for anything other than a flip flop. This helps reduce the errors that designers may make when writing the code.

The general guidelines for blocking and non-blocking assignments are as follows:

The most basic type of adder is the ripple carry adder.

An improvement we can make to these adders are calculating the sum and product of the inputs A and B ahead of time to improve the speed of the adder.

Another way to write the equation for \(C_{out}\) is 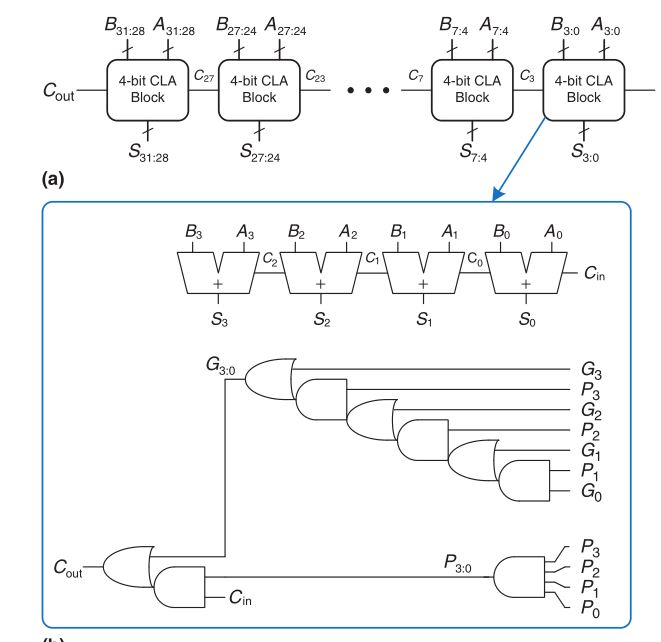 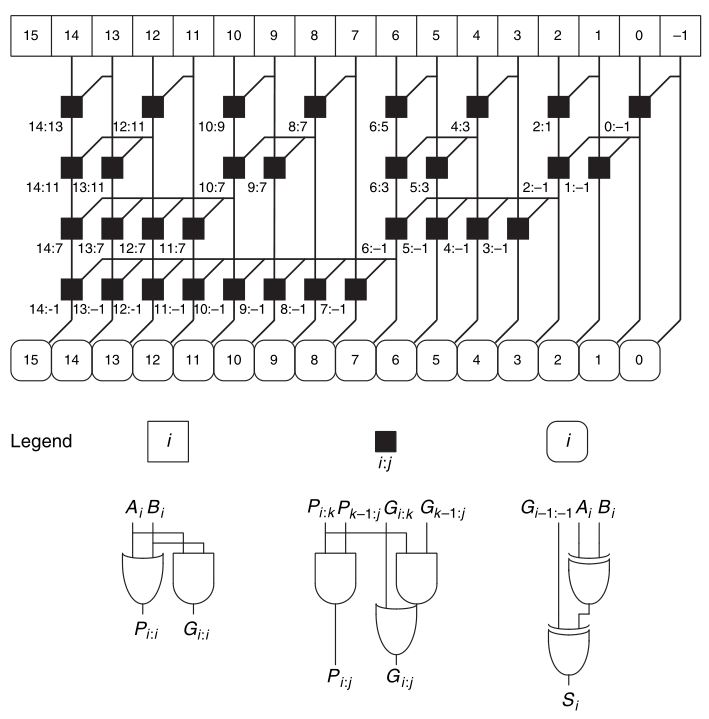 The time delay of a prefix adder is

FPGA stands for Field programmable gate array. It is a set of logic elements which can perform a variety of functions in order to create programmable logic boards. 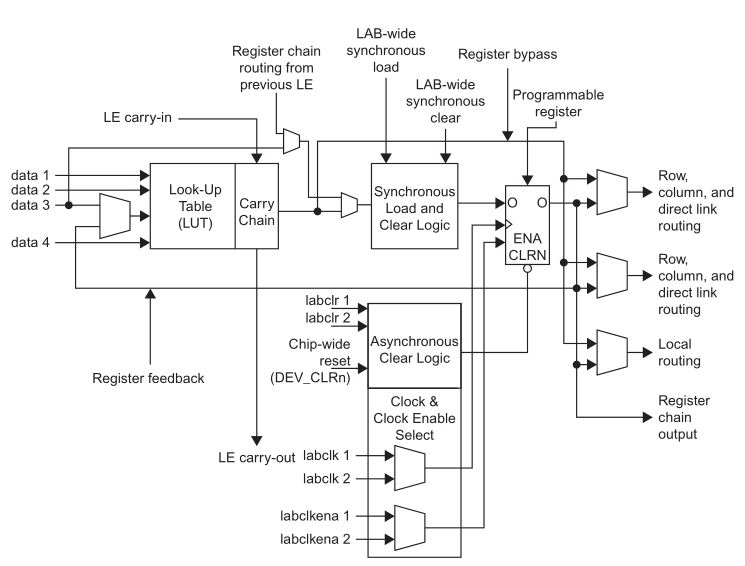 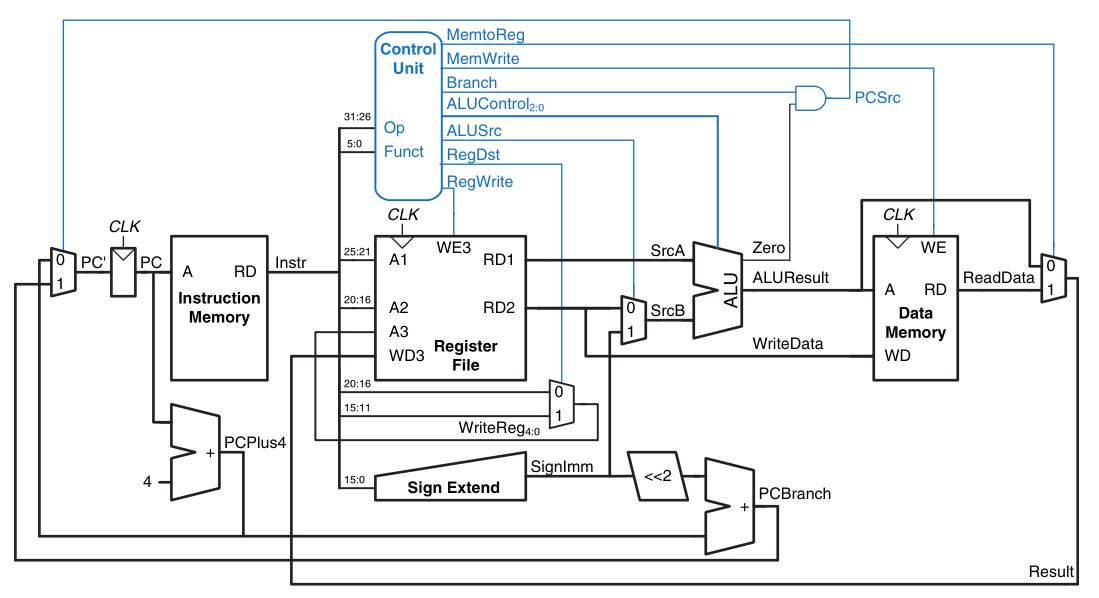 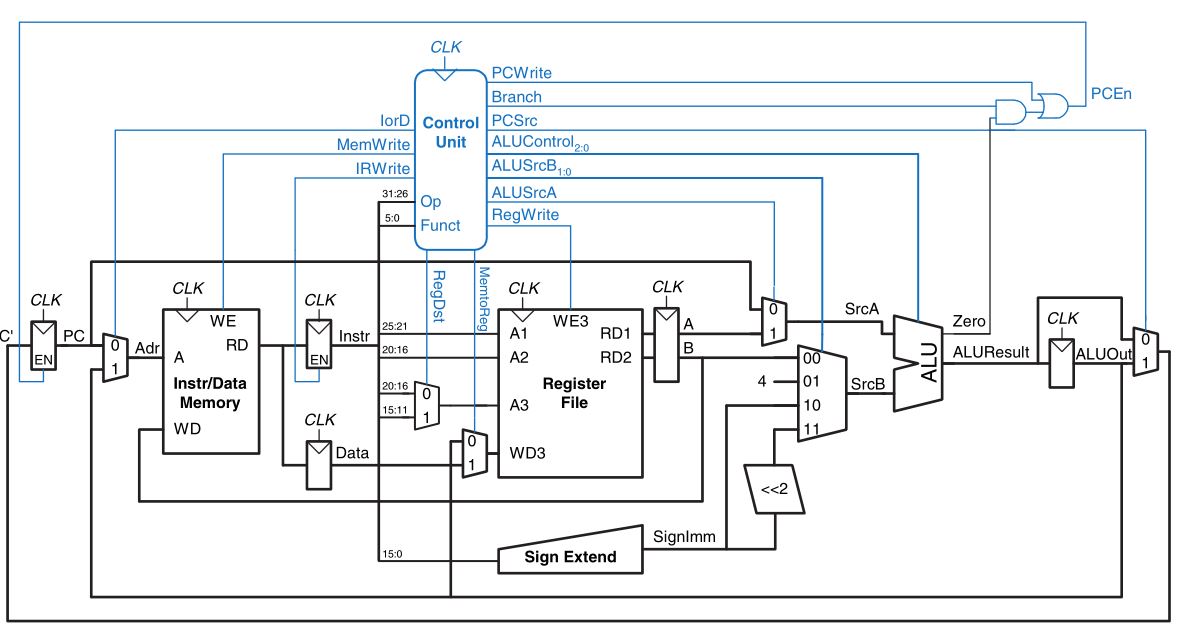